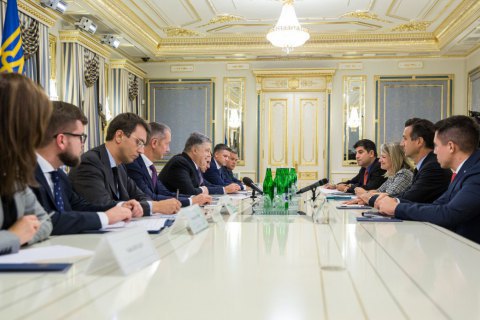 President Petro Poroshenko on 3 October met with the head and executive director of the US company General Electric Transportation Jammie Miller.

According to the president's website, the parties discussed the prospects of the US participation in the modernization of Ukrainian railways, in particular the update of Ukrzaliznytsia's fleet of locomotives.

On 21 July, 2016 General Electric and Ukrzaliznytsia signed into a Memorandum of Understanding on a strategic cooperation in the field of renovation Ukrainian fleet of locomotives. From September 2016 to February 2017, a cargo diesel locomotive by General Electric was on demonstration run in Ukraine.

On August 3, Ukrzaliznytsya and GE Transportation have signed a letter of intent to cooperate in the modernization of existing and the production of new diesel locomotives for Ukraine for the next 10 years.

General Electric will determine a production base among Ukrainian companies to localize the production of locomotives in Ukraine.

Also, Ukrzaliznytsia and General Electric are in talks on the lease of 20-30 GE locomotives.