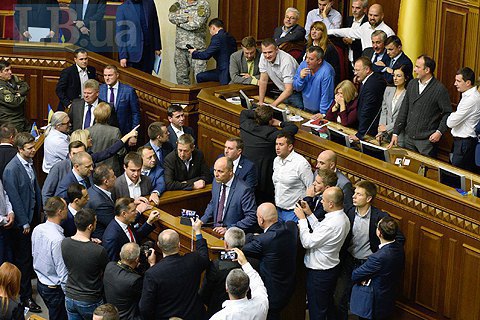 On Friday, the Verkhovna Rada by 233 votes passed in the first reading the bill No. 7163 "On the peculiarities of the state policy for ensuring the state sovereignty of Ukraine over the temporarily occupied territories in Donetsk and Luhansk regions". The bill was supported by 114 of 138 PPB deputies, 71 out of 81 People's Front MPs, 19 out of 49 independent MPs, 17 of the 20 Radical Party members, 12 of 19 members of Will of the People.

Speaker Andriy Parubiy put to vote an amended bill does not mention Minsk agreements. The second reading will contain provisions on the occupied Crimea.

The bill terms the military presence of Ukraine in Donbas as "measures to ensure national security and defense, contain and repel Russian armed aggression in Donetsk and Luhansk regions." The bill suggests amendments to other laws containing the term "antiterrorist operation.".

The command over the uniformed forces involved in the operation shall be carried out by the Joint Operational Headquarters of the Armed Forces of Ukraine.

The law will enter into force on the day of publication and will be valid until the end of the special period announced in 2014.

During the vote Freedom's MP Yuriy Levchenko started a scuffle in front of the rostrum, shouting that the bill violates the Constitution of Ukraine.