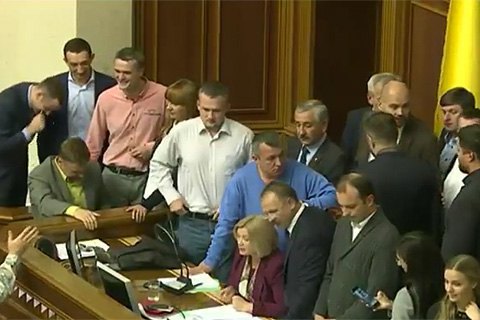 Verkhovna Rada speaker Andriy Paruby adjourned the session on Thursday, 5 October, as the consideration of draft laws on Donbas in parliament sparked brawls in the house.

During the speech of the leader of People's Front faction, Maksym Burbak, deputies of opposition factions Self-Help, Fatherland, and independent MPs attempted to seize the rostrum by force. They faced the resistance of the ruling coalition.

Vice-Speaker Iryna Herashenko tried to continue the session, saying that she was negotiating with militants in Minsk so she will not be intimidated by Self-Help deputies. She vainly tried to bring the unruly deputies to order.

Her appeals were not heeded, and Parubiy had to adjourn the session.

President Petro Poroshenko introduced to the Verkhovna Rada a bill "On the peculiarities of state policy on the state sovereignty of Ukraine on the temporarily occupied territory of the Donetsk and Luhansk regions," and another bill that provides for an extension for one year of the law on the special order of government in some areas of Donbas.