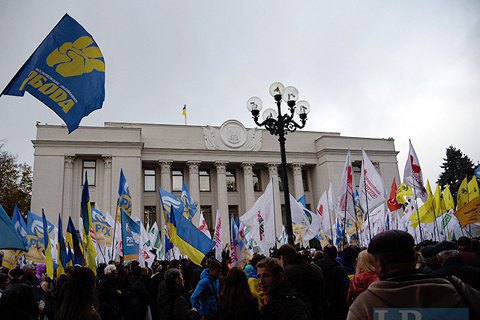 President Petro Poroshenko supported the demands of the rally for political reform, which is held near the Verkhovna Rada.

"I am glad that my initiatives found such a response both in the hearts of the people and the organizers of the action. Two years ago I introduced a draft of amendments to the Constitution that provided for the abolition of deputy immunity and judicial immunity," Poroshenko told journalists on Tuesday, 17 October, at a briefing after the meeting with the President of Malta.

"The first stage addressed judicial immunity in the format of a judicial reform, which was made at my initiative. It stripped of immunity eight thousand people. Now we are talking about 450 people," said the president.

He also supported the requirement to create an anti-corruption court.

"The entire judicial reform is implemented in close cooperation with the Council of Europe and the Venice Commission. The Venice Commission has considered those bills that are in the Verkhovna Rada, and rejected them as inacceptable for implementation in the judicial system. I want to emphasize that the term anti-corruption court itself was first introduced in my bill on judicial reform. I expect the parliament to work out a bill that will be acceptable," he said.

The president reminded that the 2018 draft budget provides for the costs of the anti-corruption court.

The president stressed that the adoption of these bills requires quiet job rather than storming revolutionary approach.

Among the key requirements of the participants of the rally are the change of the election system in Ukraine, particularly, transition to a proportional system with open party lists, the restriction of political advertising on television, creation of an anti-corruption court, and the abolition of parliamentary immunity.

The rally is organized by opposition political forces led by Mykhailo Saakashvili.