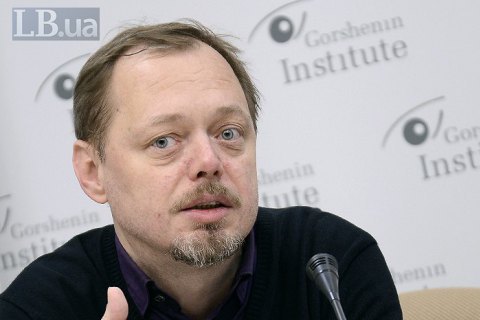 An expert in the group "Culture" of the Reanimation Package of Reforms, Serhiy Haletiy, called on the Verkhovna Rada to promptly adopt bills №№3238-p, 3239-p, and 3240 on amendments to the Tax, Customs and Budget Codes in the domain of cinematography.

Speaking at a round table at Gorshenin Institute that was organized in partnership with the Reanimation Package of Reforms on Wednesday, 18 October, the expert recalled that back the parliament in March passed the law "On state support of cinematography in Ukraine", but it will not work without this package of accompanying bills.

"These bills were in the package with the law on the Support of Cinematography. Such separation is exposed to risks: the bill is passed but it does not work without the accompanying legislation. The bill itself is an intention, a road map," said the expert and compared the law with beautiful wallpaper that cannot be put on the wall without glue.

Haletiy stressed that all the government support of cinema industry envisages amendments to the Budget Code. "Without an amendment that provides that government support is used, including to finance the Fund, all program will not receive funding next year," he stressed.

This package of accompanying bills also includes tax and customs benefits, which are designed to stimulate the production of films and their distribution, he said.

"For example, we are talking about the exemption of the industry from VAT, which, among other things, can reduce the price of movie tickets. Plus, this package sets a mechanism for the return of the funds spent in Ukraine to foreign filmmakers.

The bill on state support of cinematography provides that the state will fully finance debut, documentary, educational, animated and children's films. The state also undertakes to invest up to 50% of the budget for TV serials, and 80% for films.

The new law proposes to support both Ukrainian and foreign filmmakers by reimbursing 25% of the funds invested by producers and 10% of the cost of acting fees. The policy is aimed to attract foreign producers to shoot films in Ukraine.