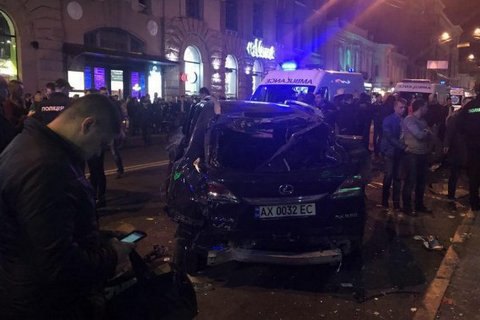 Late on 18 October, a Lexus driven by a 20-year-old woman crashed into pedestrians on the sidewalk of the city's thoroughfare, Sumska St., killing five and injuring eleven, local media reported.

The Lexus ran a red light and hit a Volkswagen Touareg, driven by a 49-year-old man. After the impact, the Lexus crashed into a lamp post, rolled over and skidded to the sidewalk.

The driver of the Lexus was detained. The incident is being investigated under Article 286 Part 3 (violation of traffic rules, which resulted in the death of several people) of the Criminal Code of Ukraine.

MP Anton Herashchenko, an adviser to the interior minister, said the car was registered with the girl's father.

Patrol police said that Zaytseva, who was examined on the spot, was not under the influence of alcohol or drugs.