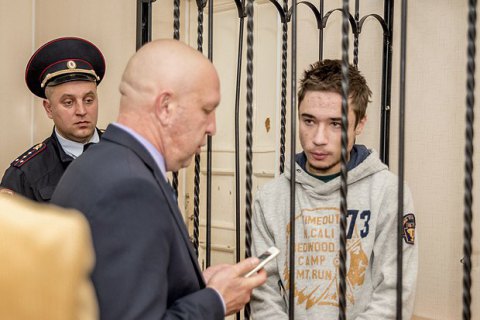 The Russian Federal Security Service (FSB) suspects young Ukrainian national Pavlo Hryb of the preparation for a terrorist attack in a Russian school.

A Russian daily learned from investigators that Hryb suggested that his girlfriend from Sochi detonate a bomb during a school assembly.

On 18 October, a spokesperson for the investigation said that the Ukrainian youth held radical nationalist views and persuaded his friend from Sochi to blow an improvised explosive device at the graduation assembly at a local high school.

Hryb is facing charges of aiding and abetting terrorism.

Pavlo Hryb disappeared on 24 August when he went to the Belarusian city of Homyel, where he was to meet his Internet acquaintance from Russia. However, according to his father, a former border guard, now a military chaplain Ihor, the young man disappeared immediately after crossing the Belarusian border.

Ihor Hryb went to Belarus and was told by local police that Pavlo Hryb was internationally wanted on suspicion of terrorist activities. He was sought by the FSB of Russia. Later it became known that Pavlo was arrested in Krasnodar until 17 October. Later, the term of the arrest was extended until 4 January 2018.

Pavlo's relatives insist he requires due medical care as he has problems with blood circulation due to the syndrome of portal hypertension.