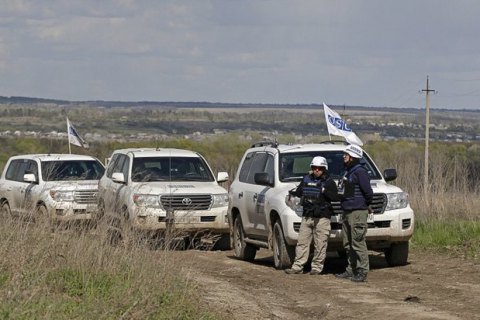 The OSCE Permanent Council has voted to extend until January 31, 2018 the mandate of the monitoring mission at two Russian border checkpoints "Gukovo" and "Donetsk". The delegation of the Russian Federation opposed the extension of the mandate of the OSCE mission to the entire stretch of the Ukrainian-Russian border, Ukrainian Foreign Ministry said on Friday, 20 October. In turn, Ukraine "expressed deep disappointment with Russia's unilateral refusal to agree to the expansion of the mission's mandate for the entire stretch of the border adjacent to the temporarily uncontrolled territory of certain regions of the Donetsk and Luhansk regions."

"Such acts of the Russian Federation suggest deliberate unwillingness to contribute to de-escalation of the situation in Donbas and the conscious intention to continue the delivery of heavy weapons, military equipment and ammunition, militants and mercenaries, provide support to terrorist activities on the territory of Ukraine", the ministry said in a comment.

Ukrainian delegation urged the Russian Federation to strictly implement its commitments in the framework of the Minsk agreements, first of all provisions on the establishment of control and constant monitoring by the OSCE over the temporarily uncontrolled section of the Russian-Ukrainian state border with the creation of a security zone along the border between Ukraine and Russia.