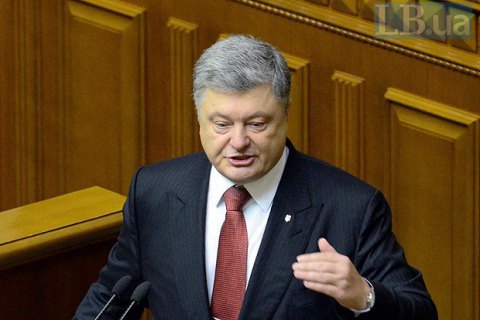 President Petro Poroshenko called on the Constitutional Court to consider bills on the abolition of parliamentary immunity as soon as possible, so that the Verkhovna Rada is able to vote the first reading of the bill at this session, and in the whole at the next session.

“On behalf of the majority of Ukrainian, s on behalf of the Ukrainian people, I ask the Constitutional Court to consider this issue shortly, unblock the course of changes to the Constitution as regards parliamentary immunity, return [the bill] to the parliament and give an opportunity to vote in the first reading already at this session,” Poroshenko said on Friday, 20 October, during a visit to a detachment of the State Border Service in Kyiv region.

The president noted that a similar bill had already been considered before by the Constitutional Court and the conclusion had been positive.

“I hope that at the next session, in the spring, the Verkhovna Rada will not lose its courage and will provide three hundred votes for the final and irrevocable decision to cancel parliamentary immunity. I hope that those who have been actively self-promoting on the topic of immunity, trying to get political PR, will not change their position when they see that this is no longer a PR, but a reality of life in Ukraine,” Petro Poroshenko said, noting that this was a demand of the Ukrainian nation, the president and the majority of the parliament.

Poroshenko praised yesterday’s vote as a responsible political step towards the abolition of their main privilege.

“I have set the abolition of judicial and parliamentary immunity one of the main tasks in my election campaign,” the President emphasized.

He reminded that in 2015, when the presidential proposal of amendments to the Constitution regarding the abolition of judicial and parliamentary immunity had been submitted for the first time, the decision had been implemented only by half – in the framework of judicial reform, the complete immunity of judges had been cancelled."

The president reminded that he stated in his Address to the Verkhovna Rada last month that that the abolition of immunity was a top priority.