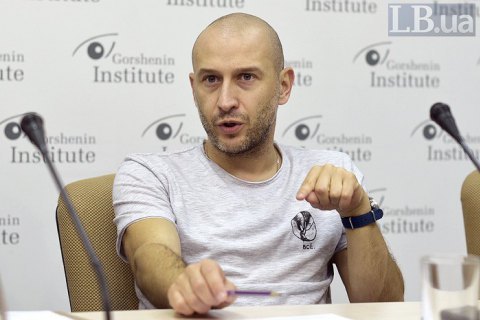 The main advantage of the Ukrainian film industry on the global market is cheap labor, Producer Volodymyr Yatsenko, who is also the chair of the Public Board at State Cinema Committee, stated at a round table conference at Gorshenin Institute, which was organized in partnership with the Reanimation Package of Reforms.

At the same time, Yatsenko warns that the situation will change as soon as Ukrainian economy starts to recover and salaries go up.

"Cheap labor is all that we have now but the situation will change pretty soon," he said.

A huge amount of advertising for Europe is filmed in Ukraine because it is cheaper than elsewhere .

"This industry is forging English-speaking cadres for Europe, and even for movie industry. When we shot Voroshilovgrad, a half of the crew was from advertising.

"As for the cinema, it happens as well but with the help of the state. Some people come here to shoot but they do it at their own risk and risk without support and only because the price-quality ratio is much better than in all European countries. The situation will change as soon as Ukrainian economy starts to recover and salaries go up," he said.

The producer believes that the state should start thinking about helping the film industry to compete with Bulgaria, Romania, or Hungary.

"In Bulgaria, they used to have something similar to our Dovzhenko studio, an ancient dying monster. The government invited Hollywood majors under the obligation to make a certain number of films a year. And it's cool because it creates job in the industry, people learn and start to work in the national cinema," the producer said.

The state should set a steady legal framework to lure investors in Ukraine, Yatsenko stressed.

"We still keep on talking whether the industry should be privatized or not… Guys, it should be, because a big investor will never come in here without government guarantees. We are talking hundreds of millions of dollars in investments that a Solomyansky Court may give over to someone. Investors won't have it," he said.