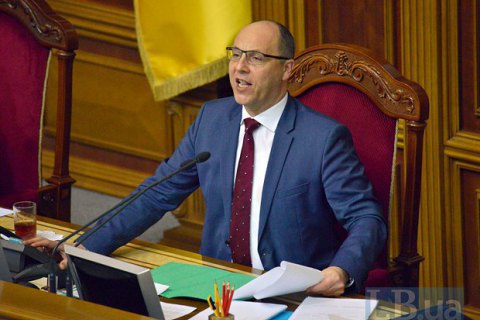 "The agenda for Thursday includes two bills on immunity. One bill was submitted by the president as urgent, the other bill was drafted and initiated by people's deputies. That is, after the consideration of the healthcare reform we shall turn to immunity issues," Paruby said.

After these bills, lawmakers will debate three draft laws that provide for the amendment of electoral legislation, and two draft Electoral Code bills

Parubiy repeated that amendments to health reform top the agenda.

"I hope that we will have time to consider 900 amendment to health care reform by Thursday morning so that we were able to concentrate on the issues of immunity and electoral legislation," he said.

About 5 thousand people came to rally opposite the Verkhovna Rada demanding to change the election system, particularly, the transition to a proportional system with open party lists, the creation of an anti-corruption court, the abolition of parliamentary immunity.

The rally is organized by opposition political forces led by Mikheil Saakashvili.