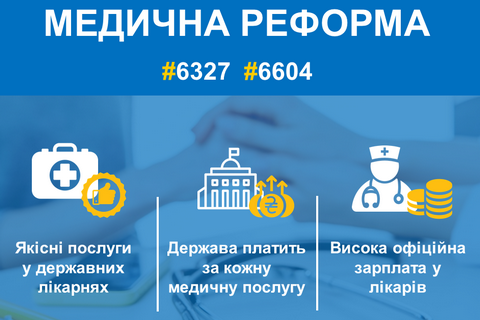 Prime Minister Volodymyr Groysman urges the parliament to pass a bill on healthcare reform this week.

In his opinion, the main task of the Verkhovna Rada this week is to kickstart healthcare reform.

"Our hospitals must provide quality services. We need to make sure that citizens knew that the state will actually pay for each of their treatment. We have to let our doctors officially receive decent salaries. We can do it by passing bills 6327 and 6604 this week," the head of Ukrainian government wrote on Facebook on Tuesday, 17 October.

"I want everyone to understand –we pay with human lives for the preservation of the existing. It is too high a price. I call on every member of parliament and urge them to unite, to start building a qualitatively new healthcare financing system in the country," the prime minister added.

On 8 June, the Verkhovna Rada adopted in the first reading of the key bill of healthcare reform bills. A related bill of the respective amendments to the Budget Code was defeated.

The Rada is slated to consider these bills at the plenary week of 17-20 October.