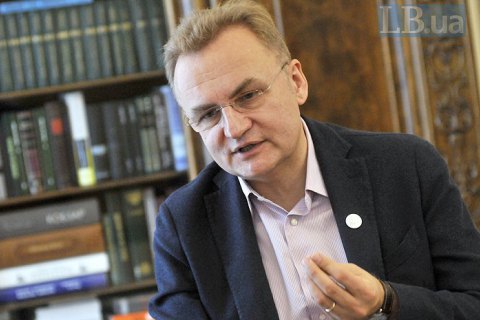 The Self-Help party believes that teaming up with other political forces makes no sense except in parliament, the party's leader, Lviv Mayor Andriy Sadovyy, responded to Sonya Koshkina's question on the possible political union of his party with the movement of former Georgian President Mikheil Saakashvili.

"When fellow politicians came to the city," Sadovyy said referring to Saakashvili's visit right after the border breakthrough, "I met them and invited them for tea and coffee. We sat together in my office and talked, and then went for lunch, and then went to sleep. We talked about plenty of things, making no decisions. And then we talk again on the next day, and then again," said Sadovyy.

"When people call me and come to see me, I always accept them and we talk. It's normal. But when some [joint] decisions are taken - we go to the press and announce this," the mayor went on

Sadovyy denied that his party is considering a merger or union with any of political parties.

"We are in union with the people who support us. Teaming up with other politicians makes sense only in parliament in order to work productively and pass laws. It is nonsense to talk of unions today, two years before the election, especially in Ukrainian politics," the mayor believes.

"I need communication. I like it when Hrytsenko comes to Lviv and drops in for a cup of coffee. We drink coffee and talk. The same is about Tymoshenko, when she is in Lviv, and about other politicians. It is normal to maintain human relations, because human relations are the foundation to build on," the leader of Self-Help summed up.

Read more in the full text of the interview "Andriy Sadovyy: Self-Help will take part in presidential elections".