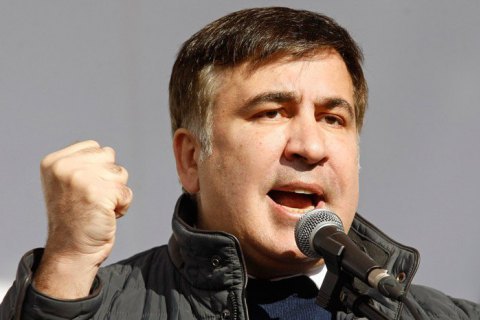 The former Georgian president and ex-head of the Odesa regional state administration, Mikheil Saakashvili, has said that the protest tent camp outside parliament may pack up and leave after 7 November.

"We give them the last opportunity to accept our demands on 7 November. We suspect that they will not do so. We cannot stand here for ever, we cannot freeze here for ever," he said at a rally near the Ukrainian parliament in Kyiv on 29 October. "If they accept them, that is good, this will be the first step. But if they do not accept them, it seems to me we should find other peaceful forms than just live under their windows."

He once again said that the authorities must change and he has a plan for this.

The protest initiated by Saakashvili's Movement of New Forces, Fatherland, Self-Reliance, Civil Position, Democratic Alliance, Freedom and the National Corps has been held outside parliament since 17 October. The protesters demand the establishment of an anticorruption court, the abolition of parliamentary immunity from prosecution, the president's impeachment and the introduction of the proportional electoral system and open party lists.