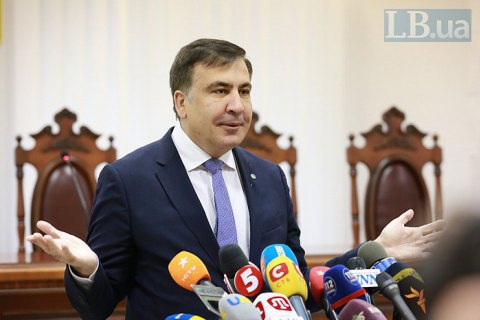 Georgia's ex-president, former head of Ukraine's Odesa regional state administration and head of the Movement of New Forces, Mikheil Saakashvili, has said at a news conference in Warsaw that he will seek to restore his Ukrainian citizenship, according to 112 Ukrayina TV.

He also plans to "break the neck" of Ukrainian oligarchy.

According to Saakashvili, President Petro Poroshenko is "deeply afraid of his political person".

He said that he was not going to break through the border again to enter Ukraine.

"Next time I will come from some European city on a regular flight… I will quietly arrive at Boryspil [airport] where I will be quietly met by people. This will happen very shortly," he said.

Saakashvili was detained in a Kyiv restaurant and expelled to Poland on 13 February. On 10 September 2017, he broke through the border into Ukraine from Poland. By that time he had already been stripped of Ukrainian citizenship.