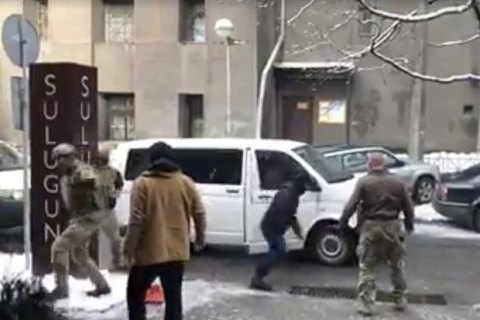 Georgia's ex-president and leader of the Ukrainian Movement of New Forces, Mikheil Saakashvili, has been detained in the Suluguni restaurant in central Kyiv, his close ally David Sakvarelidze has said on Facebook.

Saakashvili's ally Liza Bohutska said that he was being taken to Boryspil airport to be deported to Poland.

"We are going to Boryspil airport preliminarily. There is a flight to Warsaw at 5.25 p.m. It seems they want to carry Misha away on this flight," she said on Facebook.

Saakashvili broke into Ukraine from Poland on 10 September with the help of his supporters. He had already been stripped of Ukrainian citizenship.

According to Saakashvili's allies, today he was detained by a special unit of the State Border Service on the instruction of the Migration Service.

He may also be flown out from Kyiv's Zhulyany airport, therefore his allies are present at both airports.

Earlier, Ukraine received an extradition request for Saakashvili from Georgia where he was sentenced to three years in prison in absentia. In mid-January, the Ukrainian Justice Ministry extended the verification of the request until the cases on Saakashvili's loss of Ukrainian citizenship and rejected refugee status are considered in courts.