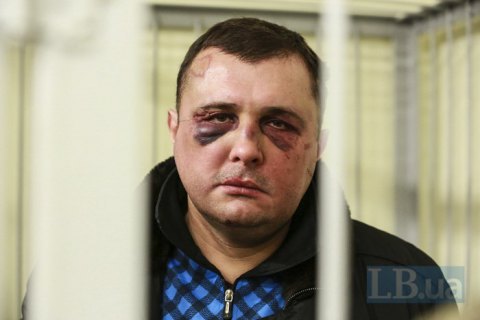 Former MP Oleksandr Shepelev has said that before he was detained by the Security Service of Ukraine (SBU), he had been abducted by people who introduced themselves as military prosecutors.

"I was detained only yesterday. Several days before this, I was arrested, abducted, I would say. They put a sack on my head and [shoved me] into a car… They said there were from the military prosecutor's office, the special department. For two days, they held me nobody knows where. They were demanding whatever information I have about the incumbent authorities. [They asked me if I had] information about Tymoshenko, Poroshenko, Turchynov, any known oligarchs? They beat me, they beat me hard," Shepelev said in the Pecherskyy district court.

"After I was in no condition, they mended me a bit, washed and dressed me in different clothes because the clothes I was in were all covered in blood and dirty. I ended up in a forest in Koncha Zaspa. And then I was detained by the Security Service of Ukraine allegedly on an anonymous tip," he said.

When Shepelev was brought to the Pecherskyy district court on 9 February, his face was heavily bruised. He complained about a broken jaw, which made it painful for him to talk.

He was detained in Kyiv suburbs on 8 February. Documents issued by the ministry of state security of the self-proclaimed separatist Donetsk People's Republic were found on him, therefore he is suspected of high treason.

Shepelev was a member of the Ukrainian parliament of the fifth and sixth convocations. He was elected on the Fatherland ticket but defected to the Party of Regions faction in 2010. He is accused of embezzling over 220m hryvnyas from Rodovid Bank and of organizing the embezzlement of 315.3m hryvnyas of NBU refinancing, in coordination with businessman Pavlo Borulko, in March-May 2009.

In July 2013, Shepelev was detained in Hungary. He was extradited to Ukraine in March 2014. However, on 6 July, Shepelev fled from a hospital where he had been transferred from a remand centre.

In March 2015, Shepelev was detained by the Russian police in the Moscow village of Gorki on the Interpol international warrant. Later he was detained once again in Moscow. It was reported in August 2016 that he agreed to cooperate with Russian investigators and he was released from a remand centre.