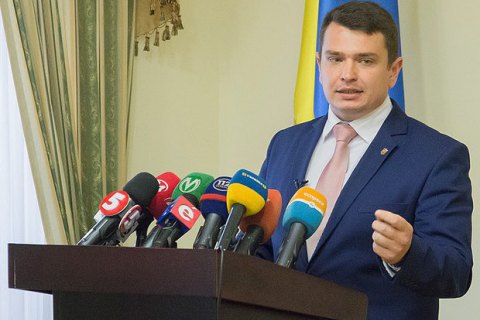 The director of the National Anticorruption Bureau of Ukraine (NABU), Artem Sytnyk, has said that the launch of the anticorruption court in Ukraine in 2018 will be a test for the Ukrainian authorities on the political will to fight corruption.

"We are close to the point of no return in the anti-corruption reform. Either in 2018 a court that will be able to review these cases [cases related to corruption] will be established and it will be done with it, or Ukraine will confirm that we don't have political will in the struggle against corruption," Sytnyk said at a joint briefing with Special Anticorruption Prosecutor's Office (SAPO) chief Nazar Kholodnytskyy in Kyiv on Thursday.

He noted that for a very long time the discussions on the draft law on the Anticorruption Court continued, and finally, at the end of 2017, it was introduced to the parliament.

"I am very glad that now there is already a law in the parliament on the Anticorruption Court - the draft law - and was introduced by the authorized subject - the president of Ukraine," he said.

"I hope that this court will be launched this year because I responsibly declare that if this law is adopted in February or March, then this institution can be created before the end of 2018. And this will be a trial for our authority about the political will on fighting corruption," said Sytnyk.

He noted that without the Anticorruption Court, the activities of NABU will not be effective, since only the court decides whether the person is guilty or not.