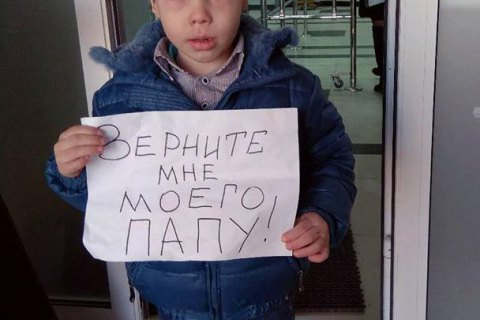 On 9 February, the Russia-controlled Crimean supreme court extended by two months the term of custody of Crimean Tatars from Simferopol District suspected of terrorism in the case of Hizb ut-Tahrir, a pan-Islamic movement banned in Russia, but not in Ukraine.

These are Uzair and Teymur Abdullayev, Emil Dzhemadenov, Ayder Saledinov and Rustem Ismailov.

Thus, they will stay in a remand centre until 11 April.

The court hearings were held behind closed doors. Relatives and other activists were not allowed to attend. They filed complaints to the court head.

Liana Belyalova, wife of Emil Dzhemadenov, said that their elder son Yusuf asked her if he could go to the court to see his father. He prepared a small poster: "Give me back my father."

She had to explain to him that they were not allowed inside.

"He did not hang his head. He is thankful to all who visit and take interest in his and other guys' fates. Emil said that he was there only because he was a Muslim and Crimean Tatar. He said in court that he did not accept the situation Crimea has found itself in today," Semedlyayev said.