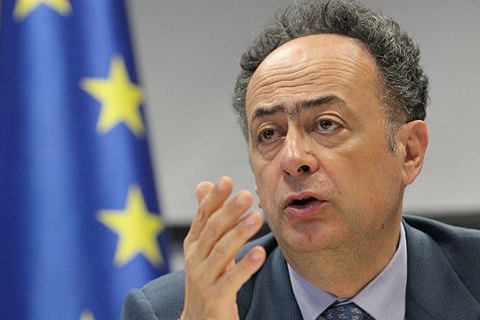 The head of the EU Delegation to Ukraine, Hugues Mingarelli, has said that the Ukrainian authorities have taken significant steps to modernise the country over the past four years.

He was speaking at a conference, "Results of EU-Ukraine Association Agreement implementation for 2017 and further plans", according to the Ukrinform news agency.

"If the authorities have political will, there is no doubt that over the past four years, representatives of this country's political power have taken significant steps to modernise and transform the country into a democratic, open society based on the social market economy. We have no doubt about this," he said.

He did not list the reforms which he believes the authorities implemented amid difficult conditions. "If you do not see them, you are either fool or narrow-minded," the agency quoted him as saying.

However, he mentioned progress in energy efficiency, digital technologies and environment among successful changes in Ukraine.

Mingarelli urged Ukraine to focus on reforms in such areas as transport, intellectual property, customs, taxation and healthcare.

Earlier, the Ukrainian government recognized that only 41% of the planned steps to implement the association agreement with the EU had been taken.

In November 2017, President Petro Poroshenko said that the association agreement had been implemented by 15% only.