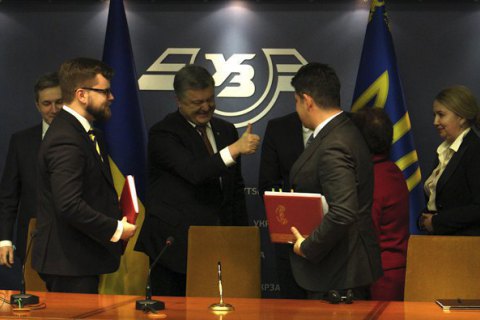 GE Transportation and Ukraine's state-owned railway company Ukrzaliznytsya have signed a 15-year framework agreement worth about 1bn dollars on partnership in the renewal and modernisation of electric traction equipment.

"Its first stage envisages the delivery in the end of 2018 and the first quarter of 2019 of 30 GE TE33A diesel locomotives with a localisation level of 10%," Interfax-Ukraine quoted Ukrzaliznytsya as saying in a press release.

The manufacturing of locomotives will start in the USA in early 2018, with first deliveries being expected in the autumn.

GE and Ukreximbank also signed a purchase and sale agreement estimated at 140m dollars (including VAT) for the delivery of the first 30 diesel locomotives. The state bank will then lease transfer diesel locomotives to Ukrzaliznytsya.

Ukreximbank board chairman Oleksandr Hrytsenko explained that the contract was signed against the guarantees of Citigroup.

The framework agreement stipulates that with time the localisation level will reach 40%. GE is expected to supply 225 locomotives of the Evolution series by 2034. Under the agreement, Ukraine should create a base for the long-term maintenance of GE diesel locomotives and modernise 75 locomotives from Ukrzaliznytsya's current stock.

"This is a very important day for us, for the development of business and transport infrastructure," Ukrainian President Petro Poroshenko, who attended the signing ceremony together with US ambassador Marie Yovanovitch, said.