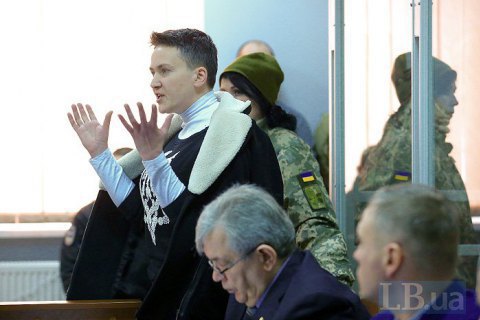 Pavlo Chevhuz, lawyer of MP Nadiya Savchenko on remand, has filed an appeal against her detention and custody with the Kyiv court of appeal.

The lawyer wants the court of appeal to cancel the ruling of Kyiv's Shevchenkivskyy district court, which placed her into custody without bail for two months, to recognize the suspicion notice against the MP as ungrounded and select a measure of restraint for her other than the arrest.

According to Chevhuz, his client does not require medical assistance and was allowed a meeting with her mother.

The Kyiv court of appeal scheduled the hearing of Chevhuz's motion for 1.30 p.m. on 29 March.

Earlier on 26 March, Savchenko's sister Vira said: "Nadya continues her hunger strike. This is her weapon against the totalitarian regime."

According to her, she was not allowed to hand drinking water over to her in the remand centre and was denied a meeting.

"I handed her personal belongings over. These are hygiene items: washing powder and other things," she added.

Nadiya Savchenko was detained on 22 March after parliament stripped her of immunity from prosecution and allowed her detention and arrest.