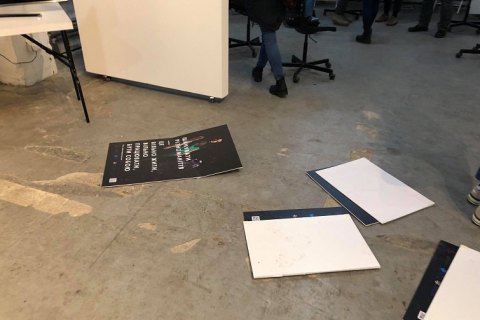 Representatives of nationalist forces tried to disrupt a discussion about the spread of far-right movements in Ukraine within the framework of the festival of documentary films about human rights, Docudays UA, Hromadske has reported.

The radicals came to the IZONE centre before the beginning of the discussion and tore down the posters which had been on display for more than a month during the 2017 Eurovision Song Contest as part of the Respect Diversity project.

However, the discussion did take place.

The Life section of the Ukrayinska Pravda website said that during the incident, about 50 young people, including teenagers who were headed by an adult man, tore down the posters about people with disabilities, Roma, transgender people and HIV-positive people.

The organizers called the police who made the young people leave IZONE. But they blocked the entrance and did not let either its participants or visitors in.