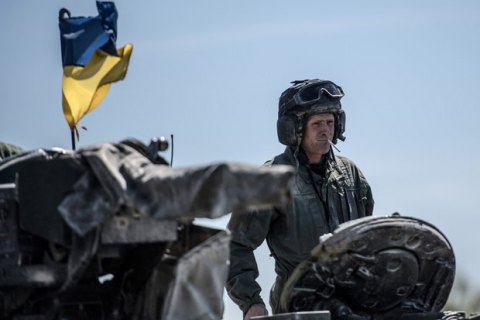 The Russian occupying troops have violated the ceasefire in Donbas more than 100 times over three days and once again disrupted the withdrawal of troops and forces near Stanytsya Luhanska in Luhansk Region, the antiterrorist operation (ATO) HQ has said on Facebook.

"The situation in the ATO area along the line of contact tends to escalate. Cynically violating the 'regime of a comprehensive ceasefire', the militants became particularly active in the Donetsk sector, using weapons that must have been withdrawn," it said.

According to the HQ, over three days the militants have violated the ceasefire more than 100 times, firing more than 40 shells and bombs against Ukrainian military positions. Enemy snipers were also active in the area.

At midnight on 26 March, the militants opened provocative fire on the ATO positions near Stanytsya Luhanska to once again prevent the withdrawal of troops and forces. The Ukrainian side of the Joint Centre for Control and Coordination of Ceasefire informed OSCE observers accordingly.

"For their part, units of the Ukrainian Armed Forces strictly follow the Minsk agreements and do not react to provocations by the Russian occupation administration," the HQ said.

As reported earlier, militants violated the ceasefire almost immediately after it came into force on 5 March. The ceasefire was fully observed during several days only in March.

On 26 March, the trilateral contact group urged the conflicting parties to abstain from offensives and reconnaissance. Also, it issued a statement on commitment to a ceasefire. According to it, a comprehensive, sustainable and indefinite ceasefire should begin in Donbas on 30 March on the occasion of Easter holidays.