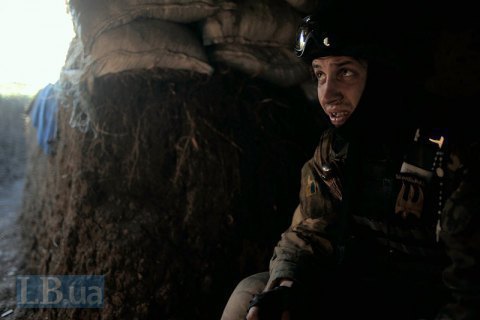 A Ukrainian serviceman was killed as the Russian occupying troops continued to breach truce in Donbas, the antiterrorist operation (ATO) HQ reported in its evening update on Facebook.

Nineteen attacks against Ukrainian army positions have been registered in the Donetsk sector since midnight.

"In particular, the aggressor fired with 120-mm mortars banned by the Minsk agreements on our positions in Opytne and Lebedynske, with 82-mm mortars and a tank near Pisky. The enemy also used 82-mm mortars against the defenders of Talakivka, grenade launchers of various systems against the defenders of Avdiyivka, Bohdanivka and Shyrokyne, and heavy machine guns against our strongholds near Verkhnyotoretske," the report reads.

The occupiers fired with small arms against the ATO positions near the Butivka mine, Kamyanka and three times near Maryinka.

It was quiet in the Luhansk sector.

On 24 March, the Russian occupying troops carried out 13 attacks against Ukrainian army positions. One Ukrainian serviceman was killed and one wounded as a result of mishandling of ammunition. There were no combat losses that day.