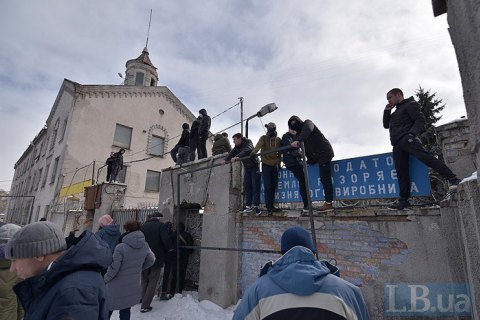 Special units of the National Police arrived at the base of the far-right National Corps party and the National Guard regiment Azov on the morning of 23 March. The base is located on the territory of the abandoned machine-building plant ATEK near Kyiv's Svyatoshyn metro station.

Police had not let anyone into the plant's territory until Azov leader and MP Andriy Biletskyy arrived. Around 20 supporters broke through together with him. Police did not open fire.

In the meantime, around 100 Azov supporters started building a barricade at the plant entrance.

The National Police later said that the department for economic protection was holding investigative measures. In particular, they confiscated documents from ATEK's administrative office. Police said they had no interest in the National Corps. The latter said the search was illegal "without an investigator and witnesses". It suggested that the presidential administration was behind it.

In a while, the National Police said on its website that ATEK was searched on the basis of a court warrant in the case of embezzlement of the plant's property worth 54m hryvnyas (around 2m dollars).

In January 2016, the ATEK administration leased out the entire territory of the plant, including warehouses and workshops, to Azov.