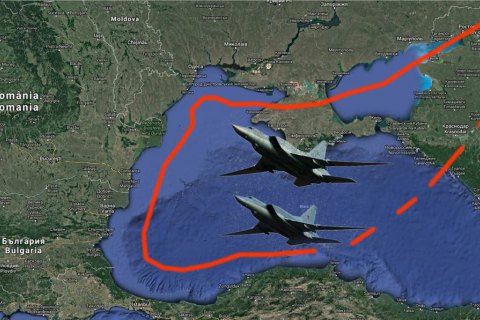 On 22 March, the Ukrainian Air Force registered provocative actions on the part of the Russian Aerospace Troops, the second such incident this March.

"The fighter and bomber aircraft of the aggressor state took off from the airfields of Shaykovka, Krymsk and Belbek and got as close as possible to the state border of Ukraine, the delineation line between mainland Ukraine and Crimea, and approached 40 km afar the shoreline from the side of the Black Sea before flying further along the coast of Romania, Bulgaria and Turkey. Besides, a group of far-range strategic strike bombers with full ammunition, accompanied by a pair of Su-30 fighters, flew in the airspace of Crimea, the Black Sea and the Sea of Azov to practice certain notional strike missions," the Ukrainian Air Force said on Facebook.

It suggested the flights were in response to the next stage of the Ukrainian Air Force command-and-staff exercises and also to practice a notional blockade of the Bosporus Strait.

"Having identified the threat posed by the aggressor country, all the assigned air defence troops and forces were put on alert to put up resistance in the event of the use of aviation by the Russian Aerospace Troops. The Air Force of the Ukrainian Armed Forces is on duty around the clock," the command said.