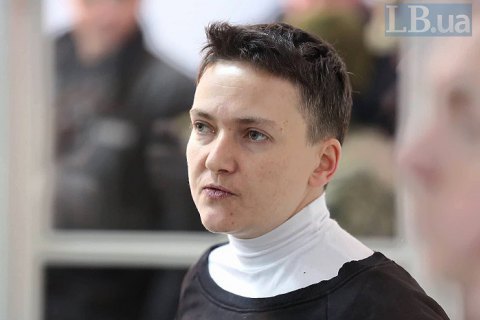 Kyiv's Shevchenkivskyy district court has placed MP Nadiya Savchenko in custody for two months and denied her bail, an LB.ua correspondent has quoted judge Yevhen Sydorov as saying. Savchenko, once a much-revered hero and Russian prisoner, is suspected of plotting to assassinate Ukraine's top officials and stage a coup.

"The investigative judge considers it necessary to apply a measure of restraint to Savchenko in the form of custody and finds no sufficient reasons to apply any other measure to her," the judge said.

She will be in custody until 20 May and may appeal this ruling, he said.

It took Sydorov more than an hour to read the ruling.

Savchenko accused the court of corruption. "See you at large! Glory to Ukraine!" she chanted. Here supporters in court shouted: "Shame!"

Before the judge read out the ruling, Savchenko once again addressed Russian President Vladimir Putin.

"Whatever happens in geopolitics, a man remains a man. I'm addressing the Russian president. I never asked for pardon... But I'm asking you to release Ukrainian prisoners. Give people life and freedom. Even the dictator can go down in history for this," she said.

She added that Putin can release Ukrainian political prisoners "by a big sports event" or on any other occasion.

She also described as fake Donbas separatists' proposal to grant her "political asylum".

On 22 March, the Ukrainian parliament stripped Savchenko of immunity from prosecution and authorised her detention and arrest. Prosecutor-General Yuriy Lutsenko served her with a suspicion notice in the presence of her lawyer.