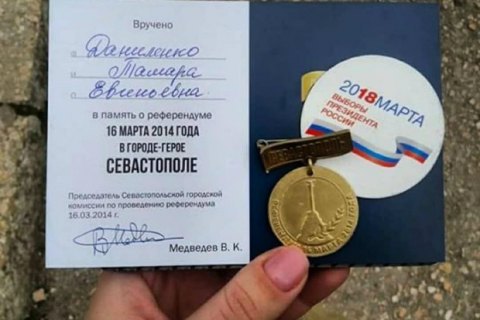 Medal for participation in the Russian presidential election in Crimea

The true turnout in the Russian presidential election in Crimea was 42% while 8% of ballots turned out to be void or invalidated, a source in the Russian-controlled Crimean government has told LB.ua.

"Representatives of the Russian presidential administration, who were here in Crimea to monitor the presidential election, receive a so-called 'white report' with true results of the voting. According to it, the turnout was at the level of 42%, while 8% turned out to be void or invalidated," the source said.

According to the source, local authorities represented by Sergey Aksenov tried to persuade the commission to amend the final document and increase the turnout by at least 10 to 15%. "The visiting emissaries were offered a very big sum of money, even by Moscow's norms. They refused. Perhaps, the situation is under control of the Kremlin's tops," the source said.

"It is an unfavourable and dangerous situation for Aksenov as he failed to meet the target set from above and turn these election results into a proof of the 2014 referendum," he added.

According to the Russian Central Electoral Commission's official reports, the turnout in Crimea was 71.47%. Out of those who cast their ballots, 92.15% voted for incumbent President Vladimir Putin.