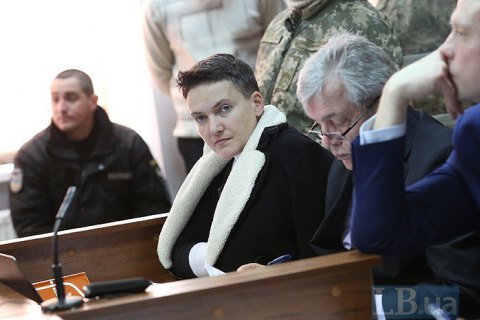 MP Nadiya Savchenko, who was detained on suspicion of plotting a military coup, does not consider the separatist self-proclaimed Donetsk and Luhansk people's republics (DPR and LPR) as terrorist organisations.

She said this in Kyiv's Shevchenkivskyy district court as it was selecting a measure of pre-trial detention for her, according to an LB.ua correspondent.

"Out of everything that has just been said: I do not respect either the president or parliament... This opinion is shared by 98% of Ukrainians who also consider me a hero of Ukraine. The DPR and LPR are not terrorist organisations. You are speculating. There are no such terrorist organisations as the DPR and LPR. This is a temporarily occupied territory where people live," she said after the prosecutor read out the indictment.

The prosecutor repeated what was earlier said by Prosecutor-General Yuriy Lutsenko. Je said that Savchenko "being a radically minded person, built a personal contact with terrorists (DPR leader Oleksandr) Zakharchenko and (LPR ex-leader Ihor) Plotnytskyy back in 2014".

"Having entered into a criminal conspiracy, she planned large-scale terrorist acts with the use of mortars and grenades against parliamet and state institutions in the government quarter, and planned to carry out mass killings of officials, MPs... to seize residential buildings and later kill President Petro Poroshenko, Interior Minister Arsen Avakov and other top state officials," he said.

Investigators believe that MP Nadiya Savchenko together with ex-negotiator Volodymyr Ruban, DPR and LPR leaders were plotting a number of terrorist acts and attempts on the lives of goverment officials in order to violently topple the constitutional order in Ukraine.