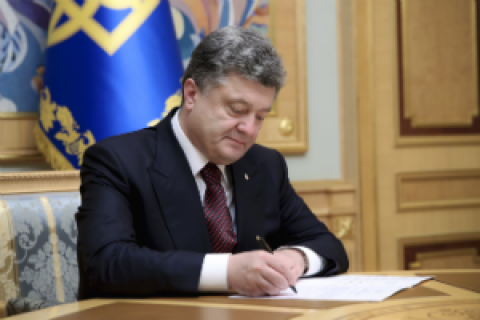 Ukrainian President Petro Poroshenko on 28 March signed a decree "On the approval of the Annual National Programme under the auspices of the Ukraine-NATO Commission for 2018", according to a UNIAN report.

"The Annual National Programme (ANP-2018) should ensure the fulfillment of priority tasks of Ukraine's cooperation with the North Atlantic Treaty Organization, as well as relevant decisions taken during the meeting of the Ukraine-NATO Commission at the level of heads of state and government held in Warsaw (Poland) July 9, 2016, and other important agreements with the NATO," the presidential administration reported on its website.

In this regard, it is noted that ANP-2018 is a systemic strategic document that defines priorities for 2018 and medium-term goals to be achieved by 2020.

The document also envisages relevant practical measures to be taken in the framework of Ukraine's Euro-Atlantic integration policy as well as reform of the country's security and defence sector in line with the NATO's standards and recommendations.

"The programme is aimed at attracting and employing the potential as well as practical, consultative and advisory assistance of NATO and member states with the aim of enhancing Ukraine's defense capability in the context of Russia's armed aggression, as well as the introduction of targeted and systemic measures to prepare the state for gaining NATO membership," the report said.

Coordination of efforts on the ANP implementation is entrusted to the Cabinet of Ministers of Ukraine.

As UNIAN reported, the Annual National Programme 2018 contains 444 measures involving 58 ministries and departments, besides local authorities and other institutions and organizations. Vice Prime Minister for European and Euro-Atlantic Integration Ivanna Klympush-Tsyntsadze noted that the ANP is the main strategic document for planning internal reforms in the context of Ukraine-NATO cooperation. The purpose of this cooperation is the country's preparation for NATO accession. In November 2017, the head of Ukraine's Mission to NATO, Vadym Prystayko, said that the Alliance was not satisfied with Ukraine's implementation of the Annual National Programme. He noted that "we keep working, while the remarks have been heard. We intend to improve our next year’s programme."