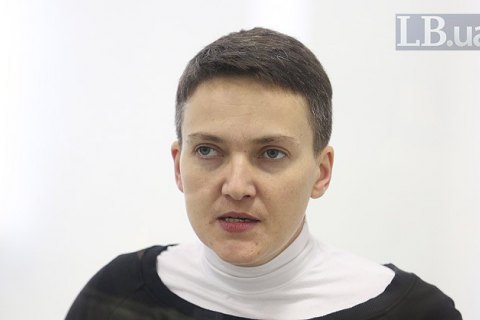 The health condition of Ukrainian MP Nadiya Savchenko, who is suspected of plotting terrorist attacks and attempts to seize state power, has worsened, her sister Vira has told LB.ua.

"Mother and I visited Nadya in a remand centre today. Nadya's health has indeed deteriorated. She has serious stomach problems. I was promised that a doctor would check on her tomorrow. Because she has been on a hunger strike for 21 days already, she has stomach cramps. I had been promised that she would have been examined yesterday. This has not happened," she said.

She "only drinks water and does not eat food", according to Vira.

Savchenko's sister and mother told the TSN news service of the One Plus One TV that Nadiya had gone from 85 kg to 70 kg during her hunger strike.

Savchenko will not be hospitalized today as investigative actions are planned.

However, she told her relatives that she is going to request a doctor's appointment on Thursday, 12 April.

"She is provided with full medical care on the spot," the Security Service of Ukraine's (SBU) press service said.

Nadiya Savchenko was detained on 22 March after parliament stripped her of immunity from prosecution and allowed her detention and arrest.