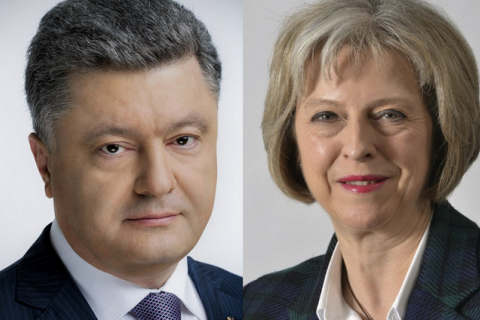 President of Ukraine Petro Poroshenko expressed solidarity with the UK in a phone conversation with Prime Minister Theresa May, according to his website.

He condemned the poisoning of Russian ex-agent Sergei Skripal in Salisbury and noted Ukraine's readiness to assist in the investigation of this case, if necessary.

He thanked London for the continued support of the territorial integrity of Ukraine and the non-recognition of the results of recent illegal elections in the territory of the occupied Crimea. The issue of strengthening sanctions in response to the aggressive actions of the Russian Federation was also discussed.

May, for her part, thanked Poroshenko for Ukraine’s support and expulsion of 13 Russian diplomats. She noted that this was not just a strong signal of solidarity with the UK, but also of commitment to our collective security.

"The Prime Minister highlighted that the breadth and extent of the international response to Salisbury sent a clear message that Russia’s malign actions will not be tolerated," she was quoted as saying on the UK government website.

It went on: "The leaders spoke about how Salisbury is only the latest act in a pattern of Russian behaviour which shows disregard for the international rules-based system, including its illegal annexation of Crimea and intervention in Donbas, with the prime minister noting that continued support for Ukraine needs to be a key element in the West’s response."