In the case of Russia, first of all, we are talking about developments that are now at different stages of implementation: from an outline sketch to a certain "iron" form.

At the same time, one thing is clear: there is no such armament on the balance of the Russian armed forces. It is not batch produced. And it will not be in the near future.

But let us look at each "bayonet" more closely. 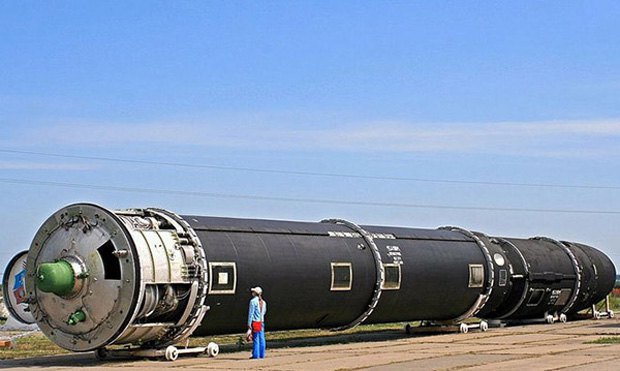 The heavy ICBM Sarmat is not in the arsenal of the Russian Military Aerospace Troops. Its flight-design tests (FDT) have not yet begun. At the end of 2017, the so-called "pop-up launch" was carried out: the missile test weight was pushed from a silo launcher (with the help of a powder pressure accumulator) to a height of 30 m. At this altitude, during a regular start, the engine of the first stage of the rocket will be launched.

However, it is necessary to carry out full-scale FDTs - flights to an intercontinental distance, launches in the direction of the Kuru range on the Kamchatka Peninsula.

The Sarmat missile is a result of further development of the previous intercontinental missile, Voevoda, developed at the Pivdenne (Yuzhnoye) Design Bureau (Dnipro). It is larger than the previous model and accordingly can carry more nuclear warheads. However, there is nothing revolutionary about this.

For example, the claim that Sarmat cannot be intercepted by ABM systems. The fact is that the ICBM generally has three phases of flight, during which the missile and its combat units are vulnerable and can be destroyed. At the initial (active) stage, the launch vehicle is very vulnerable during 2-3 minutes (before entering the space) as it gathers speed and mass-size. But during this period of time it is absolutely impossible to identify, take a decision to launch an ABM and reach the target.

Already in space (in an airless space), the target is already a small combat unit, but at the same time fake targets (bubbles, nets, baskets, etc.), which are identified as a combat unit, are released. To destroy them at this stage would require a very large number of antimissiles (tens of thousands), which is prohibitively expensive for any country.

At the last (atmospheric) stage, the combat unit enters the dense layers of the atmosphere, the speed decreases, the fake targets are burned, which allows one to identify real targets and take measures to neutralize them. And no manoeuvring will help because missile defence systems instantly calculate the options for "destroying" combat units, which cannot exceed 10-12 per one launch of ICBMs, but already when they are in the atmosphere above one's facilities. Therefore, a missile defence system protects strategic facilities and gives a chance to launch a retaliatory nuclear missile strike. An airborne nuclear explosion is disastrous for the population, but not for such facilities.

Second: the threat of making a strike with Sarmat along the South Pole. This approach contradicts the very concept of nuclear weapons since flight time is significantly increased, which makes it possible to prepare to repel an enemy attack. The task of designers is to reduce the flight time, not to increase it.

Avangard system, the manoeuvring warhead of the ICBM 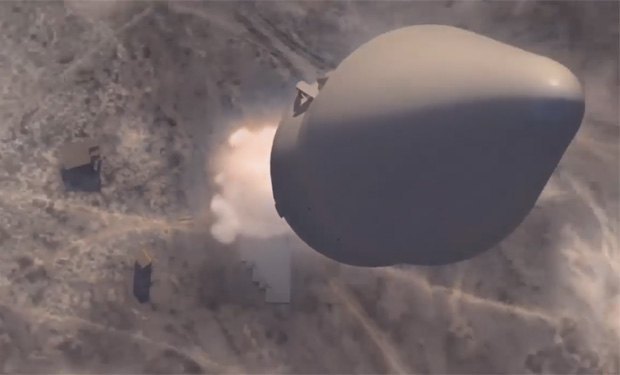 Photo: Screenshot
From the video presentation of the Avangard system by Russian President Putin

This idea emerged even before the first warheads of the first ICBMs began to burn in the atmosphere. Both the USA and in the USSR worked on these projects, but only Americans have a real warhead. It has been tested since 2010, albeit with failures so far.

Its feature is that the flight of a space glider begins at the speed of the suborbital flight of the carrier rocket, i.e. about 20-23 Mach numbers. Very strong kinetic heating deforms and burns any of the most advanced nano-materials. And practical application is still impossible.

At the same time, this warhead's manoeuvring capacity gives a doubtful since the attacking antimissile is also capable of doing this, and the calculation of the trajectory of interception is provided by modern computers. 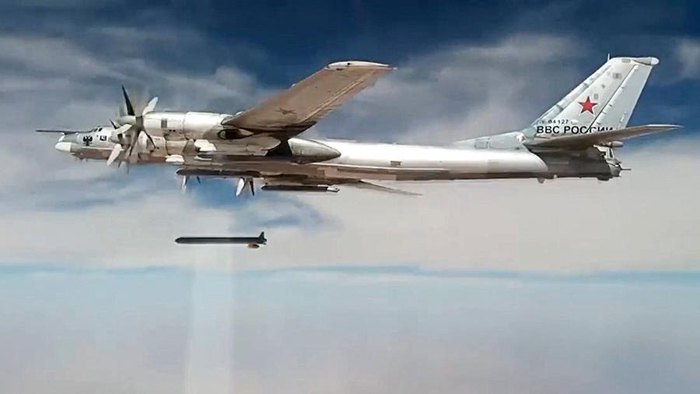 Photo: Russian Defence Ministry
A cruise missile with a nuclear propulsion unit, the range of flight at subsonic speed is unlimited.


This is not a fundamentally new concept. There were such projects in the 1960s but stumbled upon great difficulties.

A nuclear propulsion unit means that a missile is driven not by a conventional engine, but by a small nuclear reactor. And this reactor is yet to be developed, based on the current level of technological development in the world.

At the same time, its flight tests are associated with the danger of radiation contamination of the territory in emergency situations. And no such flight-design tests have been detected yet. It is known that in 1958 a project of supersonic cruise missile SLAM (Supersonic Low-Altitude Missile) began. But, according to estimates, such a device, especially at the flight altitude of 300 m, could kill by itself without even scattering atomic bombs. The Americans came to the conclusion that it was not possible to hold test flights of this missile on Earth.

The problem with discovering, tracking and defeating a low-flying aerodynamic target has already been technically solved because the pulse-Doppler radar is already used everywhere, it detects a target against the background of the earth. In addition, a working nuclear reactor completely unmasks itself. 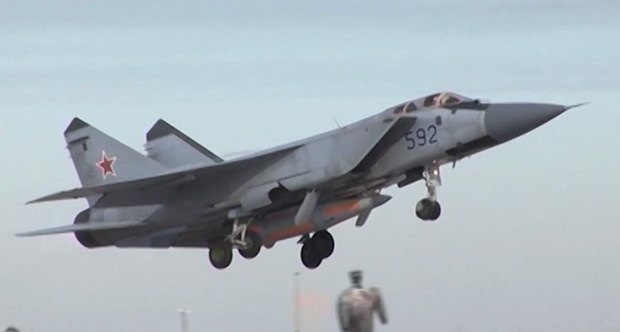 Photo: wikipedia.org
MiG-31BM takes off with a hypersonic missile Kinzhal attached to the lower point of the suspension of an interceptor fighter fuselage.


The hypersonic missile system Kinzhal does exist. It was developed in the USSR in the late 1980s and was called X-32. The tests began in 1998 and the missile was put into service in 2016, although there are no aircraft carriers for it yet - the modernization of the Tu-22M3 into Tu-22M3M is still taking more time than it was planned.

At the same time, Russia announced a "high-speed carrier with unique flight characteristics" (it is an interceptor MiG-31 adopted into service in 1981). And the missile suspended on the pylons under the fuselage is very similar to a ballistic missile of the Iskander ground system.

The system of the Iskander-K configuration uses a cruise missile R-500 with an ultra-low flight trajectory at an altitude of 6-7 meters, which circumvents the terrain and has an official range of 500 km. However, Pentagon experts believe that these parameters were deliberately underestimated to hide the violation of the Intermediate-Range Nuclear Forces Treaty. The real range of this cruise missile is 2,000 to 5,000 km. The range of the cruise missile can reach even 5.500 km thanks to increased fuel tanks. And this puts it outside the scope of the INF Treaty.

At the same time, systems capable of intercepting ballistic missiles (including at space altitudes) have long existed, which is confirmed by numerous tests.

It should be taken into account that there are still no solutions to some of the main problems in the creation of a hypersonic cruise missile (HCM).

The first and the main thing is the heating of the hull reaching extremes at the front edges of the wing and the fuselage (if traditional structural materials are used).

The second main problem is a hypersonic ramjet engine that uses physical parameters that are different from those of ordinary turbojet or reactive engines. These are high temperature, the density of air flow, as well as aerodynamic stability at such high speeds.

The advantages of HCM are not yet obvious. It is difficult to catch up and destroy but easy to detect since accompanying fire unmasks the product in all ranges of modern detection systems. At the same time, the missile shrouded in a cloud of red-hot ionized air loses the ability to pass signals from and to itself and, therefore, cannot find and hit a mobile target.

There are not even single examples of the combat use of an HCM. 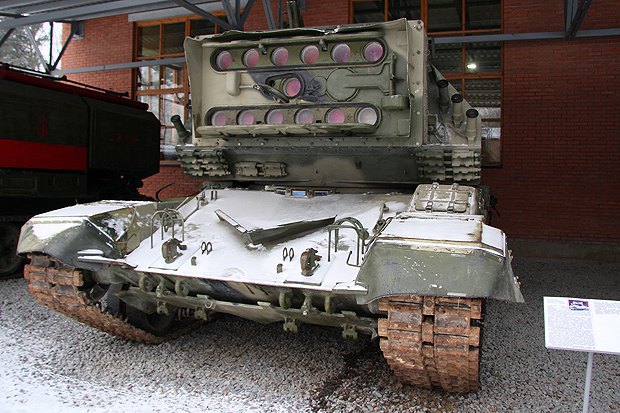 They were in service with the Soviet Army. But they are designed to disable opto-electronic systems while the system shown by Putin during his speech looks as if it was designed to defeat targets. Earlier, all attempts to create a ground-based powerful laser system of megawatt class failed. 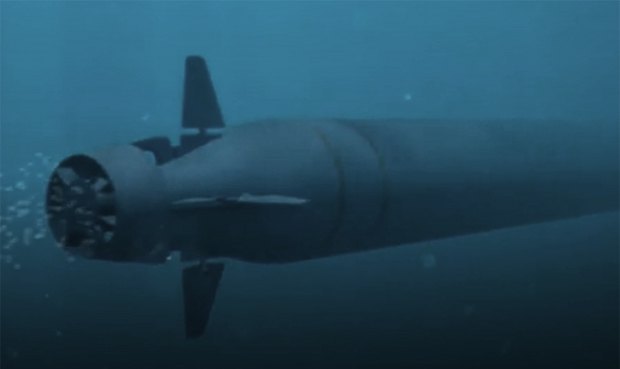 It is far from deployment. An experimental carrier for these vehicles could be the Belgorod nuclear submarine being completed at Sevmash. It became known that the Rubin design bureau was developing Status-6 from an unintended "leak" from Putin's meeting in November 2015 (at that time, a slide from the presentation with the image of the device was "accidentally" shown in a TV report). Works to develop its predecessor, a torpedo with a nuclear unit, were held back in the 1980s. This is a new class of strategic weapons for a retaliatory strike, but it is not about its deployment yet, there are no data on the test.

It should be taken into account that NATO countries have an effective system of protection against such attacks. It is a network of highly sensitive sonars and special patrolling submarines that perfectly monitor the ocean underwater environment.

The necessary requirement for technological breakthrough development is the availability of research and development teams with a vast decades-long experience and the material embodiment of this experience: in the form of test ranges, measuring systems and software. The USSR had these. Russia does not. It has lost the main carriers of priceless experience, people who embodied theoretical knowledge and technological skills. A 10-15-year "gap" in scientific and technological development, compared with Americans' progress, is obvious.

At the very best, Russia managed to revive old Soviet developments and somewhat cut the distance from the world military-technical leader.

Given Russia's recent failed missile launches, the idea that this country suddenly became the owner of flawlessly operating new weapons systems raises great doubts. And there is no independent information about the development of such technologies in Russia. Modern detection systems did not register any flight-design tests. So, there is still no weapons which Putin was talking about. It has not yet come into service with the Armed Forces. There are only single samples or just designs at all, including in the form of sketches.