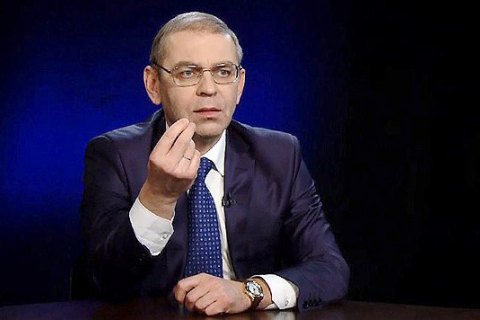 The editor-in-chief of the Novoye Vremya weekly magazine, Vitaliy Sych, has said that his editorial office has been facing threats from people close to People's Front MP Serhiy Pashynskyy and the Defence Ministry because of the article on corruption in the defence sector.

"Today, Pashynskyy's lawyers came to my office without warning to propose a settlement. In a rather polite form and with a smile (I will not name them for now), they said that people want to "tear" Novoye Vremya, but there is another option. I asked them what they mean by "tear" and whether it is a threat of physical action? They answered that we can understand it as we please and that people there are emotional. Then they clarified that they mean people in the Defence Ministry and Pashynskyy's entourage in parliament. It turned out that the peaceful option of settlement is to publish the full text of the above-mentioned multi-page article by Pashynskyy in the magazine. Also, I was given a black-and-white photo of Pashynskyy, which, at my request, will be given to me in colour and which I must put on the entire cover page as part of an apology. I was also given Pashynskyy's personal phone number with a suggestion that I should call him and build a human contact," Sych said on Facebook.Pashynskyy, for his part, said that there was a menace in his lawyer's actions.

"Over the past few years, allegations have been repeatedly made against me. Several times I even had to report myself to the NABU and the PGO. But Novoye Vremya's article about the multimillion-dollar corruption that I supposedly allowed during the supply of military hardware and equipment to the armed forces is not only my problem, but a matter of national security. I gave exhaustive comments to Novoye Vremya's journalists, but not a single word of my comments was included in the text. After the magazine was published, I did two things: I initiated a meeting of the committee on national security and defence because the allegations of multimillion corruption are a matter of national security, and I asked Novoye Vremya's editorial office, within the framework of the law in effect, to publish my answer. My lawyer Volodymyr Rakov brought my letter to the editorial office. I do not see any threat here. If he was threatened, this is a criminal offence. If Mr Sych took my legitimate demands as a threat, if Mr Sych is confident that he is right and ready for a trial, I would really like Mr Sych to write a statement," Pashynskyy said in a commentary to LB.ua.

Asked to clarify whether the lawyer brought Pashynskyy's picture to Vitaliy Sych with the demand to put it on the cover of the next issue, the MP said: "My lawyer brought a letter, in which he presented my position, and a photo, of course. Well, if you publish someone on LB.ua, you will publish a photo of this person, will not you? A refutation, according to our law, should be published in the same place where that text was published," he added.

The committee on national security and defence, which is expected to discuss this conflict, is scheduled for 3 p.m. Kyiv time on 18 April. Representatives of the Defence Ministry, Ukroboronprom, the NABU, the SAPO and Novoye Vremya editor-in-chief Vitaliy Sych are invited.