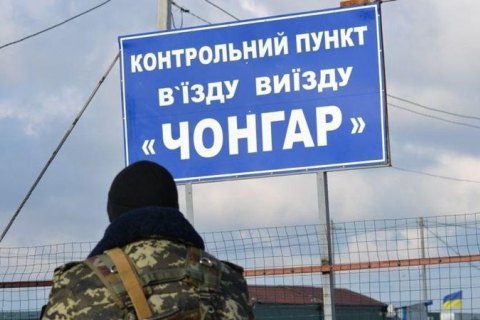 Ukrainian border guards have not let the crew of the Nord ship into Crimea as its members had Russian passports.

The press secretary of the State Border Service, Oleh Slobodyan, said in a commentary to Hromadske Radio that the sailors arrived at the Chonhar checkpoint in minivans with Russian diplomatic car plates.

"It happened tonight, around 1 a.m., these same minivans with diplomatic Russian car plates which tried to cross through the Hoptivka checkpoints with our citizens, the crew of the Nord ship, appeared at the Chonhar checkpoiny. Having talked to the drivers and realizing that the crew does not have the necessary documents to cross the administrative border, border guards warned them that there was no chance they could cross the administrative border," Slobodyan said.

After this warning, the crew members returned to mainland Ukraine. According to the State Border Service, the crew checked in a hotel in one of the towns at the administrative border with Crimea.

"They tried to cross through the checkpoint, they thought that if we did not let them through at Hoptivka, we would make a compromise with our conscience and would do that at Chonhar. Of course, the legislation did not change in the meantime. We can let Ukrainian citizens enter the occupied peninsula, but this would require [them to travel on] internal documents," he said.

On 25 March, a sea patrol of the State Border Service detained a trawler under the Russian flag in the Ukrainian part of the Sea of Azov. There was a crew of 10 members on board. All of them had Russian passports issued in occupied Kerch.

The Nord ship, which is registered in Russia-annexed Crimea, was stopped 15 miles from the Obytichna Spit. It violated the rules of leaving the temporarily occupied territory of Ukraine.

On 6 April, Mariupol's Prymorskyy district court fined crew members 3,000 hryvnyas each and released them, while the Kherson city court ruled that captain Volodymyr Horbenko should be placed into custody. However, he was immediately released on bail but was banned from leaving Kherson Region.