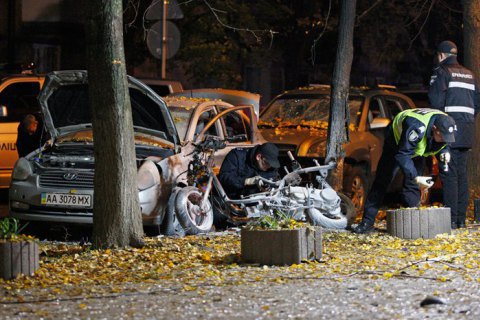 The Security Service of Ukraine (SBU) suspects an operative of the Russian Armed Forces' General Staff of organizing the terrorist act outside the Kyiv office of Espreso TV in October 2017.

SBU deputy chief Viktor Kononenko said at a briefing on 5 April that the mastermind had not been identified yet, but the perpetrators were. They are Azerbaijan-born Aleksandr Feliksovich Grigoryan (1974), Volyn-born Ihor Mykolayovych Lysak (1980) and Mykhaylo Anatoliyovych Myatnykh (1981). Two of them are hiding in Russia while Myatnykh was arrested under Article 27 Part 5, Article 258 Part 3 (aiding and abetting of a terrorist act), Article 263 Part 1 (illegal storage of explosives) and Article 263 Part 2 (illegal manufacturing of explosives) of the Criminal Code.

Grigoryan and Lysak were declared suspects in absentia and put on a wanted list. They face the same charges as Myatnykh in addition to Article 112 of the Criminal Code (attempt on the life of a state official).

"The crime was organized by an unidentified male person, representative of the Russian Armed Forces' General Staff, who arrived in Ukraine from Russia and stayed here on 9-11 September 2017 and 10-13 October 2017 to introduce Lysak to Grigoryan and set tasks," he said. While in Ukraine, the Russian serviceman used a Russian passport.

The SBU interviewed 800 people, checked over 112 recordings from surveillance cameras in the area of the terrorist act, and analysed calls made by 10,000 phone users.

An explosion which happened outside the office of Espreso TV on the evening on 25 October 2017 killed two and wounded three people, including Mosiychuk and pundit Vitaliy Bala. Both were hospitalised and underwent surgeries. Former Interior Ministry employee and lawyer Mykhaylo Mormyl and Mosiychuk's guard Ruslan Kushnyr were killed.

The explosion has been treated as a terrorist act.