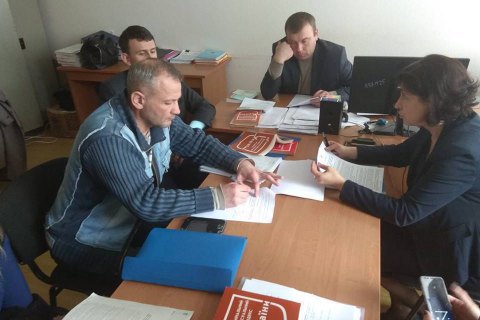 Deputy Prosecutor-General Anzhela Stryzhevska has informed Euromaydan activist Ivan Bubenchyk, in the presence of his lawyers, that the text of the suspicion notice he had been served with was changed.

According to the updated notice, he is suspected of an attempt on a law enforcer's life (Article 348) and illegal handling of weapons (Article 263 Part 1 of the Criminal Code), the spokesman for the Prosecutor-General's Office (PGO), Andriy Lysenko, said on Facebook.

Yesterday, the head of the special investigation department at the PGO, Serhiy Horbatyuk, said that Euromaydan activists charged under Article 348 are subject to amnesty introduced by parliament on 21 February 2014.

On 3 April, he was officially declared a murder suspect. He is suspected of killing a law enforcer and a serviceman of the Internal Troops and attempting to kill a serviceman on Kyiv's Independence Square (Maydan) 20 February 2014; purchasing and carrying firearms and ammunition without a legal permit.

However, on 5 April, Deputy Prosecutor-General Alla Stryzhevska said in court that the suspicion notice would be changed. Therefore, the request for arrest had to be recalled.

Bubenchyk was detained on 3 April as he was about to cross into Poland. He was taken to Kyiv where prosecutors demanded his arrest.

He became known after two years ago he confessed to killing law enforcers. Bubenchyk then fought in the antiterrorist operation area in Donbas within the Dnipro-1 battalion. Later he became the commander of the West-2 battalion. From 2014 to April 2018 he was considered a witness in the case on the killings on Maydan.

Bubenchyk's detention caused mixed feelings in society as many are unhappy over the lack of progress in the trial of the Berkut riot police who shot at and killed activists of the Euromaydan protests in 2013-2014.