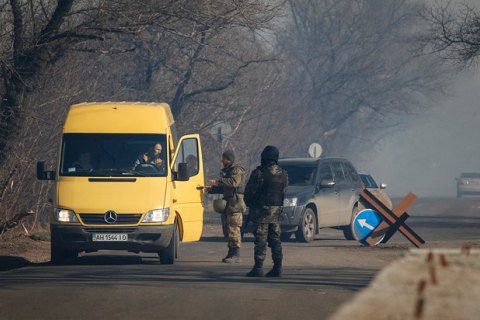 Pro-Russian militants shot a woman near the Olenivka checkpoint on the line of contact, the spokesperson for the State Border Service, Oleh Slobodyan, has said on Facebook.

"According to local residents, on 6 April, representatives of illegal armed groups of the MGB (state security ministry) in the so-called Donetsk People's Republic, namely in Novoazovsk, detained so-called local border guards who were involved in corrupt schemes at the Novoazovsk checkpoint (bribery)," he said.

"Today the MGB group arrived at the Olenivka checkpoint to crack on other representatives of so-called law enforcers. During the detention of one of the militants, the latter took out an assault rifle and made a series of shots, having hit a civilian woman waiting in line at a bus stop on the territory temporarily uncontrolled by Ukraine," Slobodyan went on.

The woman was wounded. Her condition is unknown.

According to Slobodyan, militants are trying to present the incident as a result of an attack by the Ukrainian army and thus to discredit it and hide their crime.

"Considering how far the checkpoint is from the Ukrainian Armed Forces' position, it is clear that the fire was opened by no other than representatives of the illegal armed groups," he said.

On 6 April, pro-Russian militants carried out 42 attacks against the Ukrainian army in Donbas, according to the antiterrorist operation HQ.