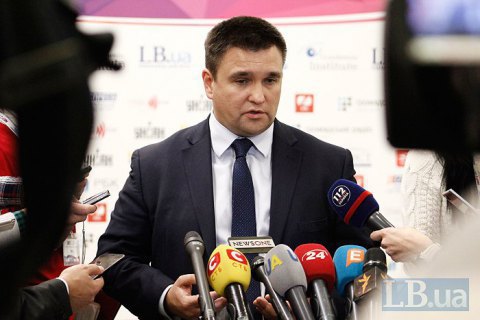 Ukraine and France have agreed the tactical parameters of a peacekeeping mission in Donbas, negotiations with Germany and the USA are to follow, Ukrainian Foreign Minister Pavlo Klimkin has said on the air of Inter TV. He was commenting on expectations for President Petro Poroshenko’s coming visit to Berlin.

“First, I expect them to clearly agree the tactic of how we are going to deploy peacekeepers, namely very specific steps. We have agreed it with the French now. Le Drian was here... The next step will be to run it past the Americans. We have a joint concept, now we need a joint tactic,” Klimkin said.

The format of a peacekeeping mission in Donbas is a matter of a dispute between Ukraine and Russia which supports Donbas militants. Ukraine insists on a full-fledged peacekeeping mission which would secure control over entire occupied Donbas, including the state border with Russia.