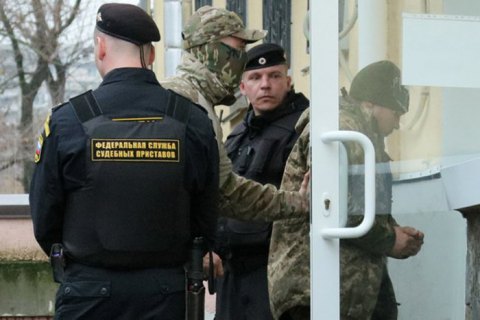 Twenty-one out of 24 Ukrainian captured by Russia off the Kerch Strait on 25 November are now in the Lefortovo remand centre in Moscow, their lawyer Ayder Azamatov has said on the air of Pryamyy TV.

He said the other three servicemen are also in Moscow but their exact whereabouts are unknown.

The lawyer said he and his colleagues were ready to continue providing legal assistance to the Ukrainian servicemen, even if it involves flying from Crimea to Moscow.

The first deputy speaker of the Ukrainian parliament, Iryna Herashchenko, suggested the Russian authorities moved the prisoners of war from Crimea to Moscow because they feared that Ukrainians and Crimean Tatars living on the occupied peninsula might put up resistance.

"The volunteer movement and support in the first most difficult hours in Crimea, where there are no Ukrainian authorities, was very important. We are especially grateful to Crimean Tatars and Ukrainians of Crimea who let it know that Crimea is ours, that they like andwait for the Ukrainian army," she said.

The Ukrainian Foreign Ministry is awaiting the official confirmation that the captured servicemen were transported to Russia. The ombudsperson has also demanded full information from Russia.