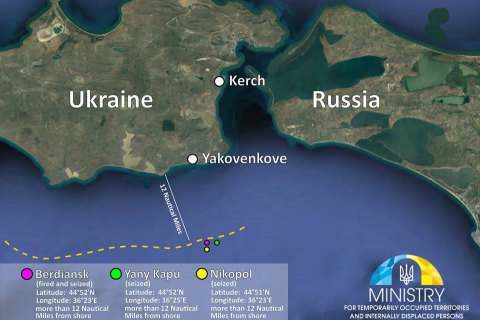 Kerch-based Russian servicemen have moved the Ukrainian naval cutters Nikopol (R176) and Berdyansk (U175), which they attacked and seized off the Kerch Strait on 25 November 2018, and disguised them, Krym.Realii has reported.

Earlier, they were moored at the end of the pier in Kerch’s Genmol controlled by the Border Service of the Russian Federal Security Service (FSB).

On the evening of 11 February, the Ukrainian cutters were not there.

They were moved closer to the coast, covered by a сamouflage net and blocked from the sea by Russian military cutters.

The Ukrainian Yany Kapu tug (A947), which accompanied the cutters on 25 November, is also moored there. From the coast, it is blocked by Russian military cutters but its side number is partly visible.