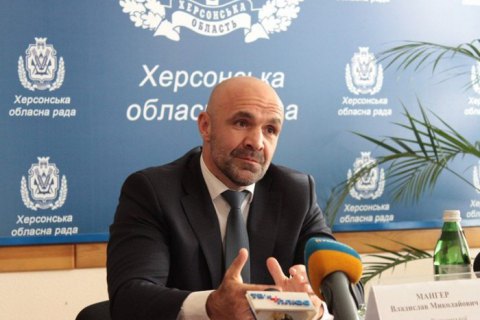 The head of the Kherson regional council, Vladyslav Manher, has promised not to flee from Ukraine now that he is under suspicion of involvement in the murder case of Kherson activist Kateryna Handzyuk.

“I did not know Kateryna and had no connection to her whatsoever. The ‘connections’ that certain political forces are painting in the press are what someone needs. I can say the audience and all people right in the face that I did not know this person, did not talk to her and our paths did not cross either in business or in politics,” Manher told 112 Ukrayina TV.

Despite being declared a suspect, he has not been detained. Prosecutor-General Yuriy Lutsenko explained that suspects cannot be detained not at the crime site or right after it. He expressed hope that Manher would show up in court voluntarily.

Manher said that he was on vacation until the end of the investigation and was ready to cooperate with law enforcers.

“I am ready to answer any questions investigators may have. I am open to investigation, I am not planning to go anywhere or flee,” he added.

Kateryna Handzyuk was attacked with acid in central Kherson on 31 July 2018. On 4 November, she died in hospital.

Her father named Manher among those who may have ordered her murder.