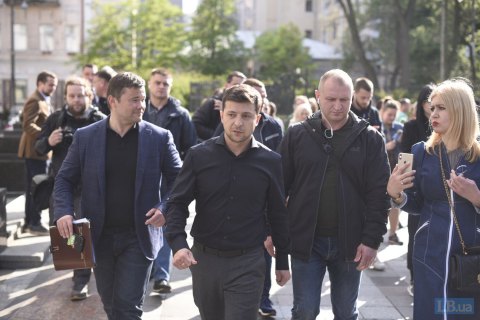 President-elect Volodymyr Zelenskyy has met representatives of the parliamentary factions to discuss the date of his inauguration, according to an LB.ua correspondent.

Following the meeting, he told journalists that he insisted on holding the ceremony on 19 May, but not everyone supported the idea.

"We will only be able to learn the date at a parliament session on 14 May," he said.

He said that they also discussed the matters of foreign and domestic policy and relations with parliament.

Later in the day, Zelenskyy posted on Facebook a scan of his address to parliament speaker Andriy Parubiy in which he also insists on holding the inauguration on 19 May.

"In the conditions of the foreign aggression, it is extremely important for our country to avoid a "vacuum of power" and ensure that the newly-elected president of Ukraine takes office as soon as possible," his statement reads.