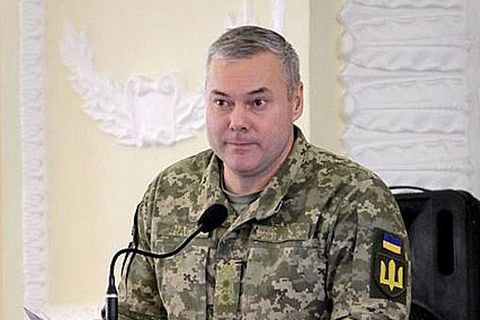 Joint Forces Operation Commander Serhiy Nayev will leave his post today because of rotation, the Interfax-Ukraine news agency has reported, quoting its sources in the command.

"A new commander will be introduced today. This will happen due to the rotation of Gen Nayev," the agency said.

According to journalist Yuriy Butusov, Oleksandr Syrskyy will be appointed the new commander.

"Serhiy Nayev's command of troops was decent, he left a generally positive impression on the personnel. The change of the commanders is scheduled, rotational. A great number of early general ranks will be assigned to a group of officers and generals today," Butusov said on Facebook.

Nayev has headed the Joint Forces Operation since 16 March 2018.

On 30 April 2018, President Petro Poroshenko announced the shift from the Antiterrorist Operation to the Joint Forces Operation in Donetsk and Luhansk regions.

Later in the day, President Poroshenko appointed Oleksandr Syrskyy commander of the Joint Forces Operation as part of the planned rotation.