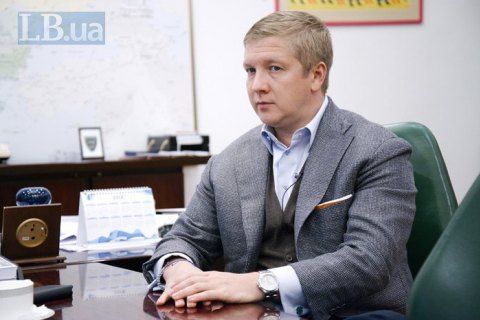 Businessman Ihor Kolomoyskyy has spoken in favor of appointing Andriy Kobolyev, board chairman of the national oil and gas company Naftogaz Ukrayiny, as prime minister.

In an interview with RBC-Ukraine, Kolomoyskyy said Interior Minister Arsen Avakov could also be appointed prime minister, but added that Kobolyev would be a better option. Avakov, in his opinion, should continue as interior minister.

"Avakov? Let's not build meaningless static constructions. Maybe he does not need this premiership at all, maybe he will continue to be interior minister and guarantee stability. For such person as [president-elect Volodymyr] Zelenskyy, this is an important support. Let Kobolyev be the prime minister. Because he is a technical person who will implement the concept of the country's development. It is important to write the very concept of development. We don’t have it. We have not had it for the last 15 years," he said.

The businessman praised Kobolyev's performance as the Naftogaz CEO. In Kolomoyskyy's opinion, the bonuses awarded to the company's board after the victory in the Stockholm arbitration over the Russian Gazprom were low.

"As regards this story with the bonuses, I believe that he is absolutely right... He took some pennies there at all. He saved from 50bn to 80bn dollars for the country. That is, if any law firm had taken even 1%, this would have amounted to 600m dollars. He took 20 and spent on bonuses to the whole team," Kolomoyskyy said.

According to him, a representative of Zelenskyy's election HQ, lawyer Andriy Bohdan, can become a new head of the presidential administration.

He also said that after the parliamentary elections, Zelenskyy’s Servant of the People party would not form a coalition with the former Party of Regions, but would be ready to vote together with MPs of the forces led by Yuliya Tymoshenko, Oleh Lyashko and Anatoliy Hrytsenko.

LB.ua contacted Andriy Kobolyev to get his opinion on Kolomoyskyy's. However, Kobolyev declined to comment, noting that he had nothing to say on this matter.