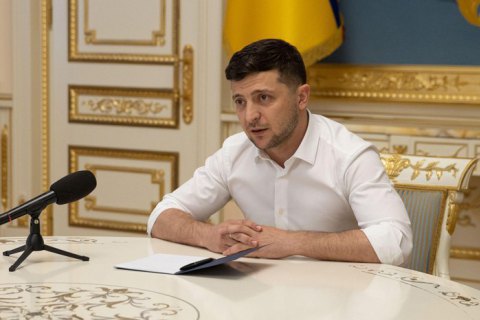 President Volodymyr Zelenskyy has commented on the shelling of an ambulance by pro-Russian militants in Donbas, as a result of which a serviceman and a military doctor were killed.

"I have just landed for refueling. I have learnt the sad news from Donbas. Two killed, one wounded. The shelling of a medical vehicle in Vodyane is a violation of international humanitarian law, a shameful and treacherous attempt to disrupt the difficult negotiation process aimed to cease fire in Donbas," he said on Facebook.

He said that Ukraine always acted in line with international agreements and law. He urged Ukraine's partners in Europe and the USA to "adequately react to the actions that do not bring us closer to peace at all".

This morning, separatists fired on a sanitary car of one of the units of the Joint Forces. As a result of a direct hit by an anti-tank guided missile, one was serviceman was killed on the spot. Military doctor Iryna Shevchenko was rushed to hospital where she succumbed to wounds. One more serviceman was wounded.