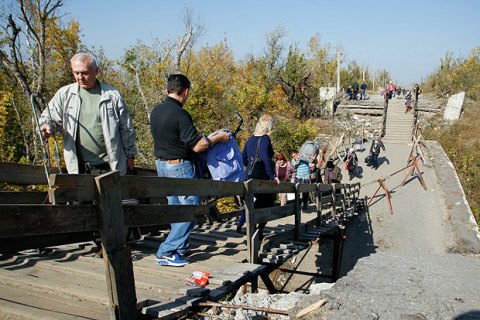 Militants of the self-proclaimed separatist Luhansk People's Republic have pulled their units from the bridge in Stanytsya Luhanska on the line of contact in Luhansk Region, the press service of the Joint Forces Operation has said.

"The enemy has completed the first phase of the withdrawal of its units in the area of Stanytsya Luhanska, having pulled back from the pedestrian bridge," it said.

Roads and adjacent areas will be checked for mines and unexploded shells on 27 June as part of the disengagement process.

No other events are scheduled for today.

"As the disengagement is in progress, our reserve units in the area of Stanytsya Luhanska are on full combat alert. In case of the absence of further steps by the Russian-occupying forces to withdraw beyond certain boundaries, the Ukrainian military will immediately return to their positions," the statement says.

The destroyed bridge in the Stanytsya Luhanska plays an important role for the locals because it is the only checkpoint in Luhansk Region between the territories controlled by the Ukrainian government and those outside its control.

The remaining sections of the bridge are connected by wooden planks for pedestrians only.

More than 8,000 people cross the bridge daily, sometimes spending many hours in queues.

The disengagement of forces in Stanytsya Luhanska, which was agreed in 2016, began on 26 June 2019.