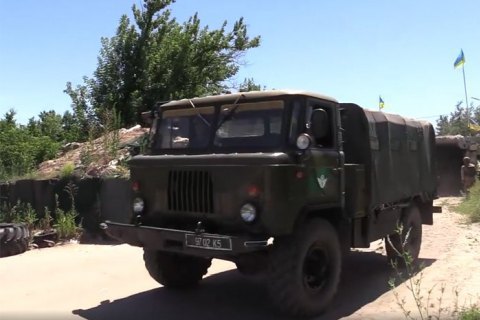 During the meeting, the parties agreed that the withdrawal of forces in Stanytsya Luhanska will take place in the course of three days: from 26 to 28 June.

"The withdrawal of troops and forces at station No. 1 is planned to be carried out within three days. From 26 to 28 June. Another day is for the making of an official statement on the withdrawal of forces. And another day for the OSCE SMM to check the withdrawal and announce the results," the agency said.

Syrskyy said that the Ukrainian side is fully prepared to deliver on its commitments.

"Along with this, there are concerns about the Russian side's readiness for the mirror actions. Especially regarding the withdrawal of checkpoint facilities from the opposite side of the withdrawal area," the HQ added.

Update. Later, the JFO press service reported that the Ukrainian units moved from one position in front of the Stanytsya Luhanska checkpoint at around noon on 26 June. This is the first stage of the withdrawal of forces at this point.

“At a signal from both our side and the militants, our military left certain positions identified by the OSCE. It is not known whether the enemy has withdrawn its troops, representatives of the OSCE observation mission are already on this. Ukraine's representative to the trilateral contact group, Leonid Kuchma, is expected to arrive these days to continue work on the withdrawal of the sides to the areas defined by the Minsk agreements," the military said.

The withdrawal then took place only near the first two settlements - near Zolote on 1 October 2016 and near Petrovske on 7 October 2016. The withdrawal near Stanytsya Luhanska was delayed because of shooting. It has been disrupted ever since.