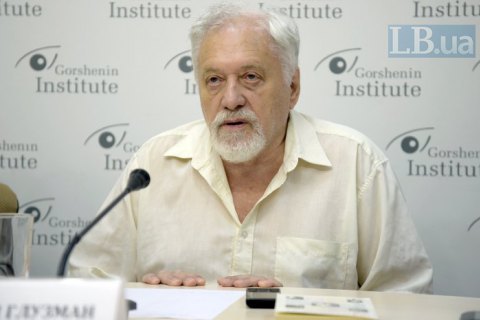 The myth that television has been made irrelevant due to the development of the Internet and social networks is widespread in society today, but users of social networks do not go to the polls, according to human rights activist Semen Gluzman. He expressed this opinion at a roundtable discussion, “Freedom of speech during election campaign” at Gorshenin Institute.

“There is not even a myth, but some kind of misunderstanding: "It does not matter what is shown on TV or what is said there because we have the Internet, social networks and the ability to receive information from within these social networks.” However, unfortunately, most users of social networks do not go to the polls. And those people who actually participate in elections and will soon participate in the next parliamentary election form their opinion with the help pf television," Gluzman said.

According to him, before the presidential election, the main message of the TV companies was about who should not be supported, that is why many people did not vote for Petro Poroshenko.

“Therefore, one cannot disregard it, as some young people do, saying that they do not have a TV and they do not watch it. Those in their 50s and 60s have TV and they used the information they had received before the presidential election to understand who they should not vote for. And that is why many of them did not vote for Petro Poroshenko. Today the situation is completely different but the channels are the same, TV hosts are the same - they are slaves, they are not guilty. It is very hard, depressing and disgusting for me to watch and listen to what's happening today on political talk shows. And, probably, it is also true for many elderly Ukrainians who do not use opportunities provided by the Internet," he added.